Date of Liberation: February 1946. Ang’angxi is surrounded by railways because of the Harbin – Manzhouli and the Qiqihar – Bei’an Railways. Thus it had high strategic importance during the Civil War. The headquarters to organize the liberation of Qiqihar was set up in Ang’angxi in March 1946. 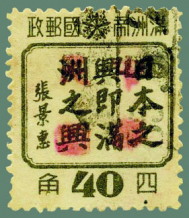 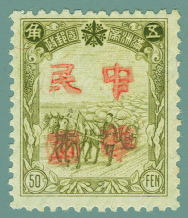 Someone in the post office in Ang’angxi must have decided that the reddish-orange overprint was not so good. Around April 1946, the stamps were overprinted again with the same (or similar) handstamp in dark rose red. Commercial covers with double overprinted stamps of the $1 denomination are known from 24 April 1946.

The left stamp shows the original overprint, known as commercially used (overprint type I). The middle stamp shows a different overprint (overprint type II), considered philatelic. It could be the same handstamp as the left stamp but in a very late worn (or repaired) condition. The yellow arrows point to the main difference. The stamp at the right shows a double overprint (both colours, type II above type I). Except for the commercially used stamps (10c, 40c, 50c, $1), all other stamps (for example, with violet or dark rose-red over violet overprint) of this handstamp type are stated as bogus / privately made. 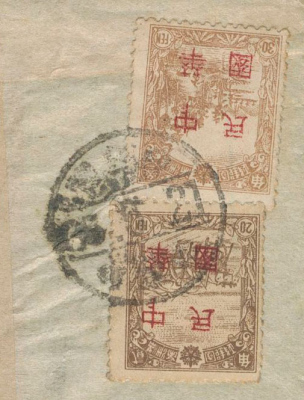 The stamps were issued in February 1946 under the KMT in Harbin (哈爾濱) and were used in Harbin until liberation at the end of April 1946. Ang’angxi is more than 300 km away from Harbin. How the stamps got in May 1946 to Ang’angxi is unclear. Probably a traveller or even a stamp dealer took them and posted them here. At least there is a direct train connection between Ang’angxi and Harbin. Prices apply only to legible postmarks type 1 from Ang’angxi. 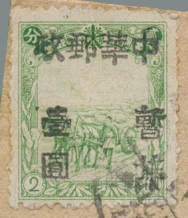 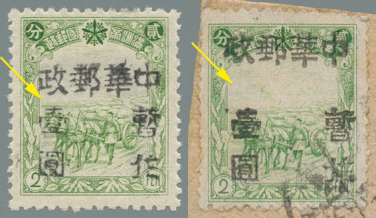 The yellow arrows below point to the main characteristic distinguishing the left, bogus and the right, issued by the Ang’angxi Postal Administration and commercially used stamps. The commercially used overprint always has a distance between the top row (“中華郵政”) and the following line (“壹 暫”) of at least 3 mm (up to 7 mm). In the Kerr catalogue, this set is listed as Kerr 10.40-44 (black overprint) and 10.45-48 (red overprint). Both overprints listed in Kerr are later, privately made, bogus philatelic issues. The officially issued, commercially used stamps of this issue do not exist unused, whereas all counterfeit stamps only exist unused. Furthermore, the overprint colour on the bogus stamps is dark blue-black instead of black. The red overprint was never used commercially. A forged postmark type F1 in red also took a place to produce fake covers in combination with the bogus stamps from Ang’angxi. 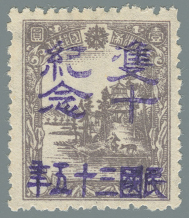 The 3rd stamp issue of Ang’angxi has mainly a political and philatelic background. The postage rate in October 1946 had already increased for domestic letters up to $2, so except for the $1 denomination, most of the stamps of this set could not be practically used as postage stamps because their denomination was too low. Used copies of smaller denominations can be found, but they usually have philatelic postmarks (CTO). The political aspect was to show that the communist authorities were a continuation of the revolution of 1911, which established the Republic of China.