[huge_it_maps id=”43″]
This map only gives rough impression about area and location.


The 6 分  denomination can be found often used on commercial covers I have here a different opinion as Kerr and believe this stamp was regularly issued.

Cover (rate of 4 元 for airmail letter).
Cancel: 21 March 1946, Bei'an (北安).
The red chop "航空" indicates air-mail.
Some comments about used and used stamp of this issue:
There are significant differences between all postally used and unused stamps (I call them early and late overprints), for example:
– the ink used for the overprints is blacker
– ink was much less liquid which gives a dry impression
– fine structures look more rough
– more distinctly damages of the hand stamp.
All unused stamps show these characteristics. If we put all characteristics together it leads only to the explanation that all unused stamps were produced later by stamp dealers for collectors using the worn original hand stamp. By implication there is also no used stamp known which comes with the characteristics of an unsed stamp which, this prove the theory.

Remarks:
– All shown sets exists (at least some stamps of each set) genuine used on domestic covers.
– Please be careful not to mix up this stamp issue with the very similar (bogus) issue Kerr 161.1-12 which used the same chop for overprint but in a different more soft purple color shade. The green arrows shows some characteristics you can found often for Kerr 161:

Differences between
Kerr 160 and Kerr 161
Not shown:
– I can’t confirm the commercial use of Kerr 160.12-14 (soft purple surcharge), but it was from some side reported. 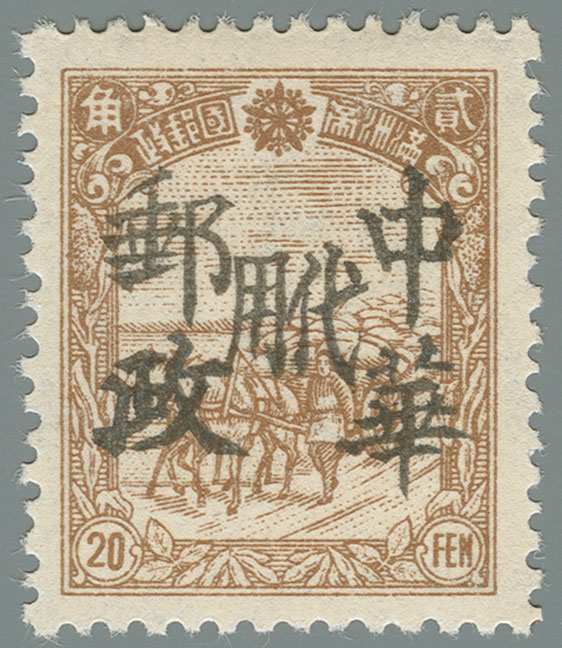